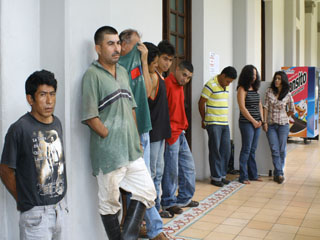 Since the DECO (Elite Division Against Organized Crime) initially reported yesterday that they had made arrests in the 2009 killings in Cabañas, little more information has been released. A new article on the PNC (National Civil Police) website this morning provides some new details, but raises a few questions as well.

Among those arrested is Noemí Menjívar Velasco for planning the murders of Ramiro and Dora Alicia. DECO officials claim that “Noemí’s brother” was also involved in the planning, but they do not provide a name and he is apparently not in custody. The brother the police are referring to may be Oscar Menjívar who was arrested last year for trying to kill Ramiro in August 2009 and attacking Santos Rodriguez, the husband of Dora Alicia, with a machete in 2008.

DECO officials report that Noemí and his brother hired José Alexander Pérez Guerra (known as “Chander or Strong”) to kill both Ramiro and Dora Alicia. Pérez Guerra is a member of the pandilla 18 from the nearby city of Ilobasco.  The motive for the crimes was to take revenge against Ramiro for killing their parents, Horacio and Esperaza.

Augosto Cotto, the sub-director of investigations for the PNC stated that while the parties were fighting over their different positions on mining, they found no links between the crimes and Pacific Rim Mining Company, which has been exploring the region for gold since 2002. Cotto stated that this was a classic case of revenge, but that it became clear in the investigation that the debate over mining exacerbated tensions in the community.

We still have questions about the case and hope that the police are not closing the investigation. For example, who is the brother that the police refer to in their story – Oscar Menjívar? If they have connected the brother, whether its Oscar or someone else, to the murders of Ramiro and Dora Alicia, are the police going to arrest him as well?

The tensions between the different factions in Trinidad had been brewing for a year before Horacio Menjívar was killed, beginning with Oscar Menjívar attacking Nelson Ventura and Santos Rodriguez with a machete in April and May 2008. Oscar Menjívar was allegedly a “promoter” for Pacific Rim, which raises the question about how much Pacific Rim officials knew about the attacks and violence and when they knew it.  If Oscar Menjívar was their employee, whether directly on their payroll or working through the Mayor of Sensuntepeque or San Isidro, they should have known of his activities and been able to stop him before the violence escalated. Have the police thoroughly considered the role of Pacific Rim in the violence and at least whether they could have prevented the murders.

The first homicide was Horacio in April 2009.  What was the context of that murder and what drove Ramiro, who police allege was the intellectual author, to take such drastic actions? Was it Oscar’s attacks on Nelson and Santos the year before, or was he taking preemptive actions in response to death threats he and other anti-mining activists had been receiving? Have the police investigated the death threats?

In our investigation of these crimes in the last few months, we have heard from many people that the mayors of San Isidro, Sensuntepeque, Ilobasco, and other municipalities in Cabañas are corrupt and have ties to organized crime, and are directly tied to these murders. While we have found few people to speak on the record out of fear for retribution, we are concerned that these crimes are being attributed to low-level gang members when other higher-level officials may be involved. This appears to be the case in the death of Marcelo Rivera, whose murder is being blamed on four gang members. We hope that the police and FGR are not ending their investigations with these arrests, and are at least considering that others may be involved.