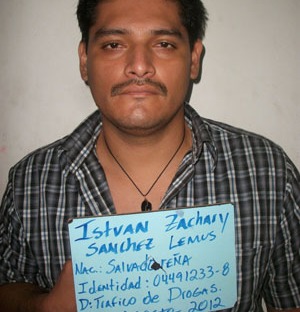 In recent years, El Faro has posted numerous articles and reports that document organized criminal activities, including drug trafficking, in El Salvador. A few days ago they published a detailed account of Istvan Zachary Sánchez and his August 2012 arrest in Honduras for transporting 50 kilograms of cocaine. The story indicates that Istvan is part of the Texis Cartel that operates out of Metapan and controls a trafficking route from Honduras, through El Salvador, and on to Guatemala.

While there are many unknowns about this case, it offers some details about how traffickers operate and how the authorities respond or fail to respond.

Instead of translating the whole El Faro article from Spanish – it’s pretty long – we thought it better to retell an abbreviated version. If you read Spanish and have the time, the original article is worth reading – here’s a link.

Police stopped Istvan while he was driving down a dirt road in rural Choluteca, Honduras, a province nestled between El Salvador to the west, Nicaragua to the east, and the Gulf of Fonseco to the south. When the police pulled him over they asked what he was doing so far off the main highway. He responded that he had been to the city of Choluteca to visit a girlfriend and was headed back to El Salvador. The police didn’t buy it because the Pan-American Highway would have been his most direct route.

They asked Istvan to step out of the 2005 Hyundai Terracan he was driving so they could search him and the car. At that point he handed the police officer an envelope with $600 (the equivalent to 1 ½ months salary for a Honduran police officer) and asked him to just let him get on his way. El Faro points out that there is a lot of corruption within the Honduran police department, but Istvan had the bad luck of getting pulled over by an officer who was not for sale.

They searched the Hyundai and found 50 kilos of cocaine wrapped in clear plastic and brown tape, and tucked into a hole between the trunk and chassis. The load was valued at $600,000 and $1.2 million. The police charged Istvan with trafficking and put him in the Choluteca jail. He has hired a private attorney and is supposed to have his first hearing before the end of October.

Salvadoran security officials had the Hyundai and license plate (P111-483) on their radar for a while. In April 2012 the Salvadoran Center for Police Intelligence drafted a three-page report in which both the car and the license plate were mentioned in relation to drug trafficking and money laundering, and members of the Texis Cartel, an organized crime network based out of Metapan and Texistepeque, Santa Ana. The report was part of a larger file that had been shared with the top levels of government including the Minister of Security and Justice. It discussed Roberto “El Burro” Herrera, José Adán Salazar (aka Chepe Diablo), and a series of vehicles and people used to transport money and drugs. In May 2011, El Faro published a series of reports/articles on the Texis Cartel – definitely worth a read if you haven’t seen them yet (here’s a link).

The April report says, “also, the vehicle license plate P111-483 has been observed in some transactions; the [Hyundai] was observed in agricultural fairs in which the subjects Burro Herrera and Chepe Diablo participated. The same plate was seen with other vehicles crossing the border at Poy [a border crossing near Metapan where the Texis Cartel is allegedly based].” This seems to directly tie the Hyundai that Istvan was driving and the 50 kilos back to the Texis Cartel in Santa Ana.

After the police arrested Istvan, Choluteca prosecutor Manuel Eduardo Díaz sent the case to the Honduran Office Against Organized Crime and Drug Trafficking, which is supposed to investigate drug trafficking. It’s not clear why, but the investigators sent the case back. Manuel Eduardo Díaz, however, decided to prosecute the case on his own. The situation got a little more complicated, and tragic, when last month assassins shot and killed him in downtown Choluteca. Police made arrests but deny any link between the murder and Istvan or the 50 kilos of cocaine.

Police on both sides of the El Salvador/Honduran border claim they are trying to figure out where the drugs were going, where they had come from, who Istvan was working with, and other questions. But so far the Salvadoran and Honduran authorities have yet to get too far or even discuss the case.

After the arrest, Salvadoran Police visited Istvan’s parents who live near the Cuscatlán stadium in San Salvador – he had listed their home as his permanent address. His family didn’t have any information, just a suitcase with some of his personal papers, which revealed that left for the US when he was 14. They also found that the US Drug Enforcement Agency had a file on him related to drug trafficking. Other documents indicated that Istvan had been incarcerated in the US but released in May 2009.

At the same time police were visiting with Istvan’s family in San Salvador they raided the home of Mario David Rodríguez Linares in San Miguel. In October 0211 he bought the 2005 Hyundai that Istvan had used. He sold it in May 2012 but didn’t register the sale with the Vehicle Registration Office so records indicate that he is still the owner. The search turned up a lot of sales records that have opened up the pool of suspects, but when investigators called Linares to come in to make a statement he never came. It still remains unclear how Istvan had possession of the car.

The April 2012 report ties the license plate on the Hyundai (no P111-483) to a business that helps traffick drugs north and money (from drug sales) south. The police have been watching a car lot in Santa Ana owned by Roberto Antonio Escobar Martínez. He allegedly hides money (millions of dollars) in shipments of cars that are headed for Costa Rica. The car lot is on the same block where earlier this year police arrested Jesús Sanabria (former councilman of Metapan) for trying to sell five kilos of cocaine. The report also says, “Roberto Antonio Escobar Martínez is linked criminally with Roberto Antonio Herrera Hernández, alias El Burro.”

Salvadoran prosecutors say they trying to connect all the pieces and identify how Istvan and his 50 kilos of cocaine fit into the drug trafficking/money laundering networks. Prosecutors investigating the case in El Salvador say they have solicited information from their counterparts in Honduras, but officials in Choluteca say that during the months that they’ve had Istvan no Salvadoran has reached out to them.

El Faro’s article is interesting because it provides a glimpse into the world of trafficking in El Salvador. We hear and read that drug trafficking and money laundering are big problems, but this story provides some insight into what this looks like. It demonstrates that trafficking can be as nondescript as a grey Hyundai driving down a back road.

The article also illustrates how hard it is to stop trafficking. Top ranking security officials in El Salvador have reports that detail who is trafficking, who is laundering money, and when and where shipments are arriving. They have details about the cars they use and the police even caught a guy with a 50-kilo shipment. But not much happens. Istvan got unlucky and got pulled over by a cop who wouldn’t take a bribe. But the Honduran agency that is supposed to take drug trafficking cases refused to investigate and the local prosecutor who was investigating was assassinated. The Salvadoran officials who are “investigating” on one side of the border haven’t even gone to interview Istvan or called to get information about his case.