Since May 2-3, Salvadoran coastal communities have experienced a series of large waves, or storm surges, that roar over the shoreline and inland. La Libertad, Majahual, and other communities have suffered significant loss, including at least one death. The surges have been reported from Mexico to Chile and are believed to be the result of storms far out in the Pacific Ocean. 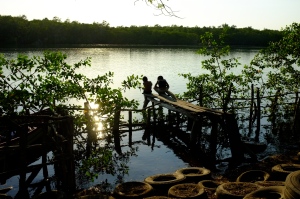 Montecristo in the Bajo Lempa region of Jiquilisco, Usulután reports that since the surges began earlier in the month, their well water has been contaminated with seawater. There is no freshwater available in the community. This would be a serious issue in any community, but for Montecristo it is especially serious because the community is located in dense mangrove forests and is only accessible by foot or boat. There is no way that a water truck could get to Montecristo and supply them with fresh water.

Voices on the Border met with the community leaders and the Bajo Lempa Water Cooperative and have begun the process of getting them tapped into the region’s water system, but this will take time and a relatively large financial investment. And the community wants to be sure that they do not disturb the mangrove forests they are charged with protecting. In the meantime, the community has to bring in 5-gallon jugs of water by boat – an expense that no one can afford. Voices will meet with the community again next week to continue planning how to best address the issue.

There are reports that many small communities along the coast are reporting the same issue – salinization of their well water.

Storm surges are not random occurrences. They are a product of hurricanes and cyclones, and can travel for thousands of miles, affecting regions far from the storm. Scientists predict that as ambient and ocean temperatures rise with climate change, and cause larger more powerful storms, coastal regions will be subject to larger and more devastating surges. The National Center for Atmospheric Research predicts that “the greatest threats from sea level rise and future storm-surge effects will likely occur along the Pacific Coast,” which is where the latest storm surges landed.

In 2009, the Center for Global Development published a paper titled, “Climate Change and the Future of Storm-Surge Disasters in Developing Countries.” It identifies El Salvador as among the top five low-income countries vulnerable to storm surges. They estimate that more than 50% of El Salvador’s coastal agricultural economy and nearly 100% of wetlands are at risk of flooding caused by storm surges. “For the majority of indicators used in this research, we observe the most consistently-severe exposure to risks for El Salvador, Yemen, Djibouti, Mozambique, and Togo.”

Even more specific, however, in a paper published in 2007 titled “Vulnerability and Adaption to Climate Change of Rural Populations in the Coastal Plain of El Salvador,” experts predicted that water tables in the Bajo Lempa would be salinized by 2020. The report says there is a medium to high level of threat that by 2020 there will be “salinization of aquifers due to the combined effects of floods and tides in the coastal fringe.”

This month’s storm surges are just another reminder that climate change is a reality and is happening now, and it is the impoverished communities around the world are suffering the consequences. Even if we are able to get Montecristo tapped into the Bajo Lempa water system, it won’t decrease the emissions of green house gases or decrease the risks of future storm surges, hurricanes, floods, and other disasters.