Don’t miss out on enjoying great music, all while supporting great causes!

↑ Buy a ticket to receive a private access code.

Learn more about the project we are fundraising for by clicking here. 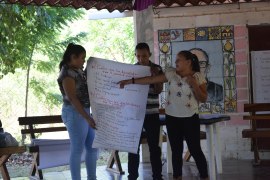 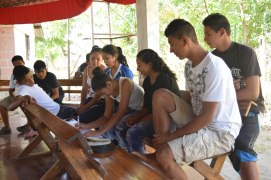 This January, South Bay Sanctuary of Palo Alto is partnering with their sister community Octavia Ortiz in the Bajo Lempa to impart programs that improve the quality of life for the young people there. The year-long project focuses on reviving youth-led cultural groups, and a Series of Workshops with themes like critical thinking, healthy relationships and group management.

On behalf of the community, we want to extend warm gratitude to our friends in Palo Alto.

Below is a video of the orientation we had last week and Stay Tuned for more!

In late May we posted an article about Mujeres de la Guerra, an upcoming documentary, book, and photography exhibit that tell the stories of “inspiring, dedicated women who participated in the Salvadoran civil war and work for justice and peace today.”

Included in the post was an appeal for the funds needed to complete the project. We received word from Lyn McCracken and Tedde Simon, the women involved in the project, that they achieved their fundraising goal of $12,000.

Here is a note from Tedde:

Our most sincere thanks to all of those who have helped us surpass our goal of $12,000 to make the Mujeres de la Guerra book, documentary and photography exhibits possible.The first edition of the book will be printed in September 2012, and will be in-hand for the November 2012 inauguration of the photography exhibit at the National Museum of Anthropology in San Salvador.  The full-length feature documentary is slated to be released in January 2013.

The Mujeres de la Guerra book includes striking black-and-white portraits of the 28 women, taken in 2010 and 2011; archival images, including women carrying weapons during the demobilization and women in the refugee camps prior to repatriation; and selected excerpts of their interviews, in which women share their stories of suffering, loss, organization, community organizing, and their dreams for the future.  There will be limited editions of the book for sale later in the fall.

Visit the Mujeres de la Guerra temporary website here to read and view more: excerpts of women’s interviews and some portraits, and staying posted.  Many, many thanks for your support and encouragement, and sharing in the belief that the stories of the Salvadoran women should be heard.

Congratulations to Lyn and Tedde and all of the women who contributed to the project! We’ll post more about the documentary, book and photo exhibit as they become available. This will be a great contribution to understanding and awareness of Salvadoran history and the current struggle for social justice.

Calle 13 is performing in San Salvador on Saturday to benefit those impacted by the  October flooding. Tickets went on sale this week – the price was a donation of rice, beans or other grains that will be distributed to flood victims.

The grammy-award winning group, which is comprised of René Pérez Joglar (aka Residente), his stepbrother Eduardo José Cabra Martínez (aka Visitante), and their sister lleana (aka PG-13), is from San Juan, Puerto Rico but has become well-known throughout Latin America for their social and political commentary.

Yesterday, people of all ages waited five and six hours in line carrying bags of grains for the chance to get tickets to Saturday’s show. Event organizers set up several ticket distribution sites around San Salvador, including Apopa, Mejicanos, Soyapango, in front of the FMLN’s office in San Salvador.

The show will be at the Estadio Mágico González at 2:00 on Saturday, and event organizers expect a sold out crowd of 30,000 people – that’s a lot of rice and beans! The show is being hosted by the Mayor’s office of Soyapango in cooperation with the National Institute of Sports and the National Administration of Aquaducts and Drains (ANDA).

This weekend a friend shared some great videos from 01TV, which is an online audiovisual group based out of San Salvador.

One we particularly like is El Videoforo in which the camera crew sets up in parks in San Salvador and Santa Tecla and interview Salvadorans passing by. Its a great peek into life in El Salvador. Sorry, the film is in Spanish with no English subtitles.

There are other shorts in which language is not an issue. Cambio de Frecuencia for example is a fun and impressive piece.