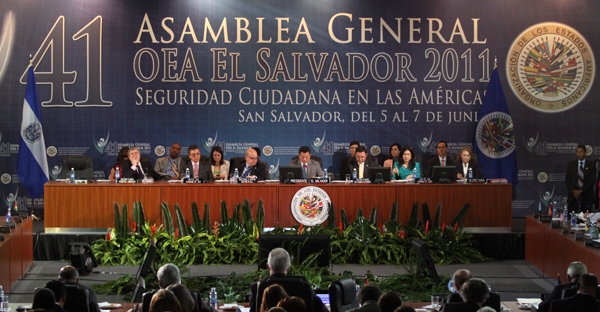 The Organization of American States is currently holding its 41st General Assembly in San Salvador, the theme of which is “Citizen Security in the Americas.” The agenda includes discussions on combating organized crime.  These discussions will include consideration of a draft proposal for fighting transnational crime, drawn up by El Salvador.  The Secretary General Miguel Insulza said that he expects “concrete results, because [they] are not going to confront the topic of transnational organized crime in [Latin America] with declarations alone.” This meeting will set the perimeters for an action plan that will be finalized for the November meeting in the Dominican Republic.

The OAS is not the only group to discuss the growing lack of citizen security and the problem of organized crime.  A recent meeting in Managua, Nicaragua of the presidents of El Salvador, Guatemala, Honduras, Nicaragua and Panama produced a new level of regional ownership of Central American organized crime.  The presidents met to affirm their commitments to collaboration in the fight against drug trafficking and trans-national crime.  Additionally, they recognized each nation’s respective weakness in the face of increasingly well-organized and -funded criminal syndicates.  Unfortunately, no specific actions were planned, but the budding cooperation between the countries is a positive step towards promoting greater security.

The United States Has pledged support and acknowledged that citizen security in the region is a “shared responsibility,” through the Central American Regional Security Initiative (CARSI). The State Department describes CARSO as an initiative to achieve five goals in Central America: 1) Create safe streets for the citizens of the region; 2) Disrupt the movement of criminals and contraband within and between the nations of Central America; 3) Support the development of strong, capable and accountable Central American governments; 4) Re-establish effective state presence and security in communities at risk; and 5) Foster enhanced levels of security and rule of law coordination and cooperation between the nations of the region.

Focusing on counternarcotics efforts (drug trafficking is at the center of organized crime), the U.S. spent $260 million on the CARSI initiative alone during 2008-2010 and President Obama pledged another $200 million during his meetings with Funes in March 2011.  Beyond financial support, several U.S. agencies are on the ground in El Salvador, including the FBI, the Bureau of Alcohol, Tobacco, Firearms and Explosives, the Drug Enforcement Agency (DEA), and USAID, all of which are partnering with Salvadoran ministries to fight organized crime.  The DEA, through their Drug Flow Attack Strategy, aim to intercept drug trafficking.  DEA agents recently played an instrumental role in a gun trafficking bust and confiscated 28 tons of ethyl phenyl acetate, a chemical used to make crystal meth.  The U.S. Military works in the region to combat drugs as well, coordinating their activities from the Soto Cano Air Base in Honduras.

In April of 2011, Panama inaugurated the Central American Integration System’s Operative Center for Regional Security (COSR-SICA), intended to be a cooperative center for the coordinated fight against organized crime.  It’s a network through which Central American agencies can share information and technology on drug trafficking, organized crime, human smuggling, gang activity, and other security threats.  It will also receive logistical support from a similar information-sharing center in Key West, Florida, where 31 U.S. agencies operate.  Each Central American nation will be sending experts to work in the Center to organize the coordinated efforts for citizen security.

The recent creation of cooperative bodies to ensure citizen security in Central America, and the increased focus on the issue by existing organizations is an indication of the growing threat that organized crime poses to individual security.  The highest levels of government are finally talking about organized crime, and that is a good first step.  But it will be important for the citizens of each of these countries to continue applying pressure so that the discussions grow into concrete actions.