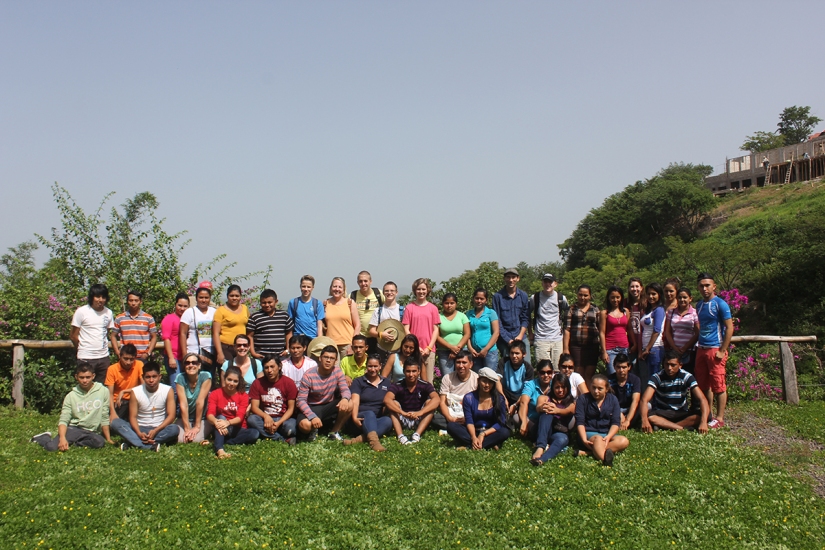 A mini international youth forum on violence took place on Sunday in Comunidad Segundo Montes. Over 50 young people aged 13-34 came from Segundo Montes and Cacaopera in Northern Morazán, from the Lower Lempa region in Usulután and a dual language school School in Northern California. Though first time in Morazán, the kids from California were on their second Voices delegation to El Salvador.

The objective of the exchange was to facilitate a meeting and reflection among youth groups in three different contexts, in order to generate knowledge and awareness of the situation of youth violence in El Salvador and possible alternatives. 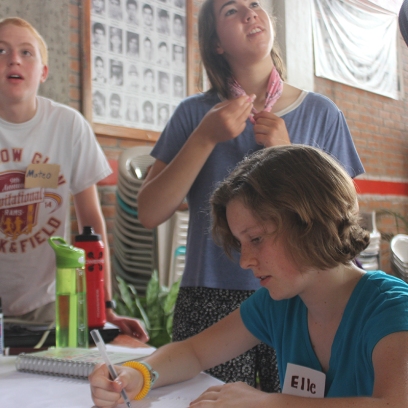 Violence seems to be one of El Salvador’s biggest threat to the flourishing of its’ future generations. In a country the size of Massachusetts with the population of 6.34 million, this March it reported 481 murders averaging about 16 a day[1]. The reality of life in many parts of the country means living daily under the anarchic control of rival gangs. Gang membership in El Salvador is reported to be around 25,000[2]. Young boys and girls are recruited every day, usually as an alternative to them or their family members being killed. Up until recently, Morazán youth have been able to escape that reality while communities in the Lower Lempa region experience an ongoing cycle of senseless violence due to gangs and drugs. 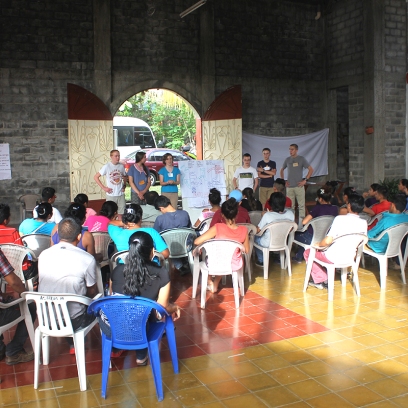 The daylong event opened with introductions, an energetic icebreaker and developing guidelines with the large group. Afterwards, Balmoris, a leader of Segundo Motes youth group Organizacaion Social Casa Abierta(OSCA), gave a detailed presentation on the history of violence in El Salvador. He started in 1932, the year when tens of thousands of indigenous people were massacred for fighting to stop the exploitation and pillage of their lands over coffee. He continued with the civil war up until today’s alarming problem with gang violence. Youth then participated in an activity aimed at building diversity awareness where they were able to visualize intersections of diversity and briefly discuss the social and personal impacts of privilege and power. The final workshop was analyzing insecurity in a local context; small groups dissected a specific form of violence in their community, developed a creative diagram to explain it, and ultimately brainstormed ways that youth can be catalysts for combating that reality. Donatilla, also from OSCA ended the day by presenting the work of INJUVE, the National Youth Institute formed to protect and advocate for young people’s rights in El Salvador. 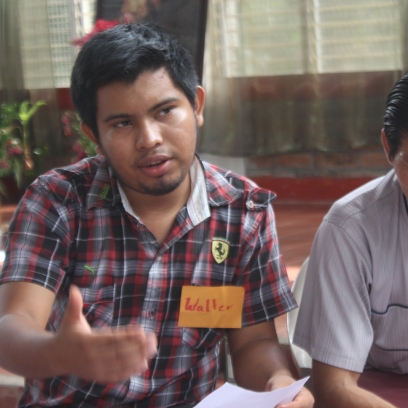 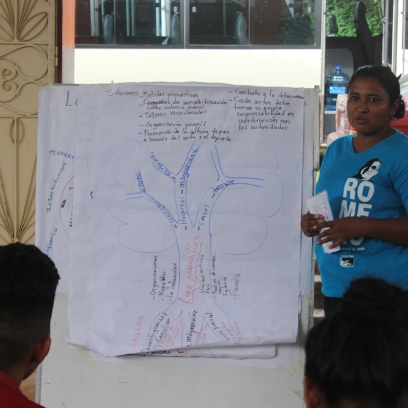 Sharing each other’s realities opened up a lot of dialogue between the youth from the Lower Lempa region and Segundo Montes. While they practically share the same history they have since experienced a much different problem with violence. In the end, many of the participants expressed a feeling of gratitude and willingness to continue the discussion at a second forum in the Lower Lempa.

This week Voices on the Border has been hosting a delegation from Georgetown University, a group of students getting their Master’s degree in Conflict Resolution. They are exploring issues of conflict and peace in the country, beginning with several meetings in San Salvador to get a general overview of issues at the national levels, followed by several days in the mountains of Morazán, where Voices has worked since 1987.

Yesterday the delegation attended a Celebration for International Women’s Day at the Temple in San Luis in Community Segundo Montes, where a few hundred women gathered to discuss issues that impact their every day lives. Even before the delegates arrived in Morazán, gender issues came up in several of our meetings in the Capital. At CONFRAS (Confederación de Federaciones de la Reforma Agraria Salvadoreña), we learned that only 1% of Salvadoran women own land! Maria Silvia Guillén, the Director of FESPAD (Foundation for the Study of Application of Law) told us of a recent case in which a woman who worked at the Legislative Assembly filed a sexual harassment case against her boss, only to be arrested for defamation. We also heard horror stories of pregnant women going to the hospital with a miscarriage, only to be arrested for supposedly trying to terminate their pregnancy. Several women have been sentenced to more than 30 years in prison. During our meetings we heard of several law reform efforts in 2012 to improve conditions for women, but few passed the Legislative Assembly, which is still controlled by men.

The celebration held at the Temple of Martyrs and Heroes in San Luis was as much a rally and call to action as it was a celebration. During the event we spoke with Father Miguel Ventura, who has been working in the region since the early 1970s. He told us that while Morazán doesn’t suffer the high rates of femicide that other regions have, they do have the highest rates of domestic violence in El Salvador. The number of men who attended the event at the Temple, approximately 5, is evidence of the persistence machismo culture. We were told that if men attended the event their male friends would ridicule them.

Speakers at the event stressed the need for women in the region to continue fighting for equality, stressing greater awareness of rights and the need to report domestic violence. While highlighting some of the successes over the years, they said that women had to keep fighting.

Traditionally men give women flowers. Perhaps next year the best gift that Salvadoran women could get would be reduction in the rates of domestic violence, femicide, and inequality.