The organizations that make up the Movement of Victims Affected by Climate Change and Corporations (MOVIAC), took to the streets of San Salvador alongside environmental activists to create awareness about the negative impacts the indiscrimate use of Agrochemicals has on the health and safety of El Salvador. 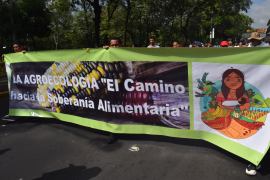 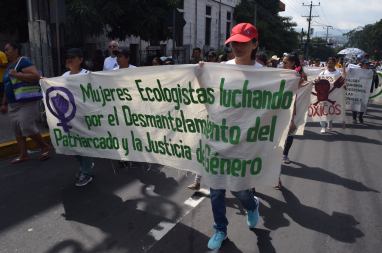 According to MOVIAC, “Agroecology brings together sustainable and ancestral agricultural practices in order to unify the relationship between nature and humans and guarantee food saftey.”

Farmers, families, educators, leaders, young and old, marched together towards the Legislative Assembly to present a proposed law for the promotion of Agroecology, as a way to mitigate the impacts of climate change. They were met by senior government officials on the environmental committee and were able to submit the documents. 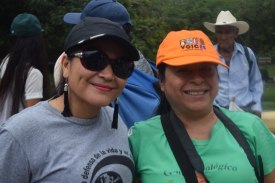 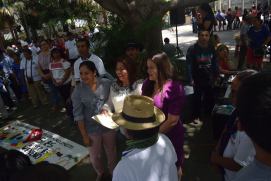 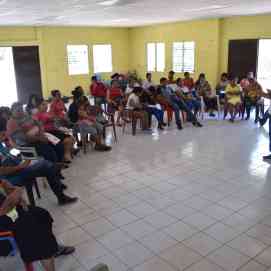 WATCH The beginning of a ten month training course called the “School of Political and Ecological Formation” for Bajo Lempa community leaders in ACUDESBAL. Throughout the year, VOICES will facilitate these types of trainings to ensure our Salvadoran partner communities have the ability to advocate for important changes and get the results they deserve.

A Salvadoran Court of Accounts found four officials from the Ministry of the Environment (MARN), including two ex-Ministers, guilty of not enforcing the Law on the Environment because they failed to stop from cutting down trees in the El Espino Forest.

El Espino is a forest and coffee plantation at the foot of the San Salvador Volcano, on the outskirts of the capital city. In addition to being an important ecosystem and carbon-sink, the forest is a recharge zone for El Salvador’s largest aquifer, which provides water to San Salvador and other parts of the country.

In the 1980s, the government declared much of the forest a protected area and limited use of other parts to only the cultivation of coffee. To protect and manage the forest, the government created the El Espino Cooperative. In recent years, members of the cooperative have used loopholes in the cooperative law to sell off parts of the forest to developers who have built neighborhoods and shopping centers. For example, in 2002 they sold 55 manzanas (96 acres) of forest to the Club Campestre Cuscatlán, which has been trying to build a golf course. In April, the mayor’s office of Antiguo Cuscatlán filed a lawsuit against the Club for cutting down 507 trees and three manzanas (5.2 acres) of coffee without permission.

The charges against the officials came after an audit of the management of the MARN. The audit concluded that developers had cut down 38,958 trees in the protected area and that 11 MARN officials had failed to stop them. The total penalty assessed by the court for allowing the destruction of 38,958 trees was $9,518, or $0.24 per tree cut down.

The largest fine was levied against Hugo Barrera (Minister of the Environment, 2004-2006). He was ordered to pay $2,341.57 for allowing the Ministry of Public Works and a private contractor to cut down trees to build the Bulevar Diego Holguín, a highway that cuts through the forest. Before beginning construction, the developers should have obtained environmental permits from the MARN, and when they began construction without permits, the MARN should have stopped them.

The audit found many instances in which Ministry officials did not enforce provisions of the law on the environment. It is yet another example of how serious an issue weak rule of law is in El Salvador. Even if the country had the most progressive environmental laws and regulations, if Salvadorans ignore them and MARN officials allow that, those laws and regulations are meaningless.

The court’s decision does nothing to hold these officials accountable for failing to do their jobs. The Bulevar Biego de Holguín highway project is worth millions of dollars. An investigation last year found over $5.9 million in unjustified expenses related to the project indicating extreme waste or fraud. A paltry $2,341.57 fine for failing to require an environmental permit is nothing in comparison. The precedent is frightening. The court is signaling to developers that they can either spend tens of thousands of dollars to conduct an environmental impact analysis and jump through many other hoops to get an environmental permit, or they can skip it and maybe promise to cover any fines that Ministry officials might incur.

Or to put it another way, these fines mean that it cost $0.24 extra to cut down each tree. Salvadorans decided in the 1980s to protect El Espino as a national treasure. The court’s decision sent the message that the developers and Ministry of Public Works can have that national treasure at a cost of $0.24 per tree, payable by the MARN officials. Any other value the trees and land might have had as a aquifer recharge zone or carbon sink was essentially donated by the Salvadoan people.

So while it is nice to hear that a court is willing to consider claims that MARN officials failed to do their job, the penalties signal that El Salvador’s natural resources are still for sale at a very low price.

On March 13, 2009, Pacific Rim posted their Fiscal 2009 Third Quarter Result, in which they state, “[i]n deference to [the] democratic process, Pacific Rim may elect to wait until after the election is decided and then evaluate the post-election climate for mining in El Salvador before initiating CAFTA arbitration proceedings.”

Recall that on December 8, 2008, Pacific Rim filed a notice of intent to commence international arbitration proceedings against the Government of El Salvador under CAFTA-DR.  Their claim is that El Salvador violated international and Salvadoran law by failing to issue exploitation permits, resulting in significant loss.  Under CAFTA-DR rules, Pacific Rim could proceed with formal arbitration on or after March 9, 2009, which is when the three-month negotiation/cooling-off period ended.

So what is Pacific Rim’s next move? (Click here to read on)