Last week, a Guatemalan court found ex-diputado Manuel Castillo guilty of being the intellectual author behind the assassination of three Salvadoran Diputados and their driver in February 2007. El Faro reported that the judges sentenced Castillo to 200 years in prison, 50 years for each murder. The court also found Carlos Alberto Gutiérrez Arévalo guilty of being an accessory to murder and sentenced him to 93 years in prison.

The prosecutor successfully convinced the court that Salvadoran ex-diputado Roberto Silva wanted revenge against the ARENA political party for turning on him when he was being charged with money laundering and corruption. The prosecutor claimed that Silva contacted Castillo to arrange the killings of the ARENA Diputados. Silva is in a detention facility in Arizona where he is being held on immigration charges and was not present for these hearings.

The defense argued that a parallel security force operated by high-ranking Guatemalan officials were responsible for the killings. This is a theory supported by the UN-sponsored International Commission Against Impunity in Guatemala (CICIG, in Spanish). As we posted in November, a leaked CICIG report provided details about the parallel security force, as well as details about the murders. The report claims, in part, that William Pichinte – one of the Salvadoran Diputados – was carrying 20 kilograms of cocaine and $5 million in cash the night they were murdered. Former Guatemalan Interior Minister Carlos Vielmann and Victor Rivera (aka “Zacarias”), who were both involved in the parallel security force, learned of the drugs and money and arranged to have the vehicle detained and searched, and the Diputados and their driver killed.

Since the CICIG report came to light, there has been a lot of dispute about its findings concerning the assassinations of the Diputados. Salvadoran Diputado Roberto D’Aubuisson, the brother of Eduardo D’Aubuisson who was one of the Diputados killed, spoke out against the CICIG report, adamantly denying that drugs were not involved. Ex-Salvadoran President Alfredo Cristiani, who is also head of COENA (the leadership organization within the ARENA party), took a less aggressive position but called for a more thorough investigation before rushing to judgment. The Guatemalan prosecutors refused to investigate those implicated by the CICIG report.

From the beginning, this has been a very confusing case in which the truth seems illusive. Those following the story have had to interpret numerous hypothesis and accusations since the attacks against the Diputados and the assassinations of the four Guatemalan police officers arrested for their murders. Ex-Diputados Roberto Silva and Manuel Castillo, who are notorious for their  involvement in money laundering and organized crime, will be taking the fall for these murders.  The ruling nearly guarantees that the people implicated in the CICIG report will not be prosecuted for this crime.  In the days following the murders, there were reports that it was a drug deal gone bad and that cash and drugs had been stolen from the scene. Though it was the revenge theory pushed by the prosecutors, the drug trafficking theory survives and those in power continue to deny it and attack those who promote it. We hope that the investigations continue, but fear that like so many of the high profile corruption cases in the region, the truth will get buried in confusion. 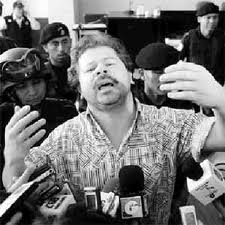 Tuesday we posted an article about a report by investigators from the UN-sponsored International Commission Against Impunity in Guatemala (CICIG) that found a parallel “security” structure that operated from within several Guatemalan institutions between 2004 and 2008.   At least a dozen arrest warrants were issued in August of this year, focusing on extra-judicial executions within the Pavón and Boquerón prisons.  The CICIG expected the network to be implicated in at least eight more crimes, including the murders of three Salvadoran PARLACEN diputados.

In February 2007, the Salvadoran diputados, who included William Pichinte, Eduardo d´Aubuisson, and Ramón González, and their driver Gerardo Ramírez were diverted from a highway outside of Guatemala City to the isolated La Parga farm. The delegates were tortured, gunned down and their bodies burned inside their vehicle. A few days after the crime scene was discovered, the Guatemalan Police arrested four of their own for the murders. While being held in a maximum-security prison in Guatemala, witnesses described a specialized unit that forced it’s way into the prison and assassinated the detained officers.

The CICIG investigation determined that the motive for the assassinations of the three diputados was robbery.  William Pichinte, an ARENA diputado, was carrying $5 million dollars and 20 kilos of cocaine in a secret compartment of his vehicle.  The parallel ‘security’ structure in Guatemala had identified the delegation, diverted them to La Parga farm, stripped the vehicle until they found the money and cocaine, and then assassinated the diputados and their driver.

The four Guatemalan police officers were not the only ones involved in the robbery/murder to be killed. The Venezuelan Victor Rivera, aka “Zacarias,” was one of the principles responsible for organizing the robbery. He arrived at La Parga farm, supposedly to confirm the orders to kill the diputados, and he also intervened during the arrests of the four police officers.  Zacarias came to El Salvador in the early 1980’s as a CIA asset to work with former CIA agent Luis Posada Carriles and Lt. Oliver North in the Ilopango Air Base “drug trafficking, kidnapping and training death squads.”(according to former DEA agent Celerino Castillo).  He was later run out of the country for ‘creating and operating irregular structures from within the National Civilian Police,’ and was linked to the 1996 police killing of medical student Adriano Vilanova (published by the human rights office in 1996 ).   Between 1997 and 2000 ‘Zacarias’ continued working with the private security sector in El Salvador and Guatemala, while picking up several public contracts with the Guatemalan government.  He was assassinated in April of 2007.  CICIG has implicated drug cartel kingpin Jorge Arturo Paredes Cordova and Rivera’s personal assistant María del Rosario Melgar for his murder.

The CICIG report also indicates that Rodrigo Ávila, who was the Chief of the Salvadoran Police at the time of the murders and later a presidential candidate in the 2009 elections, knew that Pichinte was carrying a suitcase full of money, but claims that he thought it was for a real estate deal in Guatemala. Ávila also admitted that Victor Rivera, working as the principle advisor to the Guatemalan Interior Minister Carlos Vielmann, had told him on several occasions that Pichinte was a drug trafficker. Despite these claims, he says he never saw any evidence that Pichinte was involved in drug trafficking, and that the police investigations had turned up nothing.

The information in the CICIG report is in direct conflict with the Guatemalan Attorney General’s theory that the 2007 assassinations were motivated by partisan disputes and orchestrated by the Salvadoran ex-diputado Roberto Carlos Silva Pereira and the Guatemalan ex-diputado Manuel de Jesús Castillo.  Various Guatemalan and Salvadoran functionaries have re-iterated their support for the Guatemalan Attorney General’s theory pointing the finger at Silva and Castillo. They include former Vice President of Guatemala Eduardo Stein and Salvadoran diputado Roberto d’Aubuisson, the brother of assassinated Eduardo d’Aubuisson.  This week, in fact, Guatemala’s public prosecutor Edwin Morroquín has put Silva and Castillo on trial for the murders of the Salvadoran diputados, even though Silva is still in jail in Arizona.

With all of the accusations and theories involving the parallel security operation in Guatemala, it’s difficult to imagine that anyone has shared the full truth around these murders. Presenting one theory after another has long been a strategy for ensuring that those guilty of crimes are never punished. In a related example, the investigation of the 1998 assassination of Guatemalan Archbishop Juan Gerardi went on for 9 years, and prosecutors and government officials offered as many as four separate theories as to who was responsible. Finally the government convicted Sergeant Obdulio Villanueva and two others for the murder. Villanueva was decapitated in the Pavón Prison in 2003.

While the CICIG’s determination that the diputados were murdered over the $5 million and 20 kilograms of cocaine they were carrying is more than valid, their mandate limits the scope of their investigation to Guatemala, meaning that they have not been able to answer some very important questions. Where did the $5 million and 20 kilograms of cocaine come from? Why did Victor Rivera (aka Zacarias) go to El Salvador and try to meet with Rodrigo Avila the day that the four police were killed in Boquerón? What, if any, Salvadoran names or networks would CICIG investigators have turned up if they could have expanded their investigation across the border?