More than two weeks after El Salvador’s historic floods, victims continue the slow recovery process. As people clean their homes and live with very real public health issues, they are also planning how to protect themselves against future storms.

Days after the Lempa Rivera completely flooded communities along its banks in Usulután and San Vicente, we posted an article on the public health concerns residents would likely face when they returned home. We are very sad to report that this week an 18-year old male in Salinas del Potrero died when he contracted leptospirosis, a “rare and severe bacterial infection” that can occur when people are exposed to standing water in tropical regions. He most likely contracted the bacteria from water or food contaminated with urine from rats, cattle or other animals.

Other people are suffering from a wide variety of fungal infections, and according to our staff in the field, everyone they have talked to has a cold. The public health risks will remain a concern for the near future.

This week, the Funes Administration released their preliminary report on the flood damage – $840 million. The storm cost El Salvador $300 million in production alone, including the destruction of bean and corn crops, which would likely have yielded record harvests. El Salvador’s infrastructure sustained $260.58 million in damage, and there was another $207.8 million in damages to homes, schools, and health centers.

Residents of the Lower Lempa are still cleaning and trying to plan their next steps for recovery. Our field staff says that people continue hanging out clothes and personal belongings in the sun to dry, and that the entire region smells like a moldy swamp. Our staff also says that though our friends are as happy and hospitable as ever, they are definitely suffering. 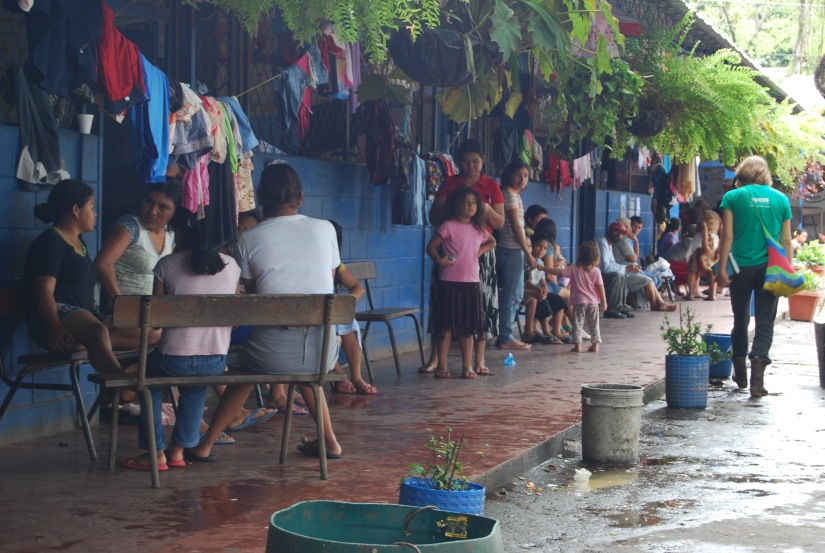 Some farmers are debating whether to plant another crop of corn. Because the rainy season is all but over, they would be depending on the water in the soil to sustain the crop. They would be running the risk that the ground would dry up within the 2.5-month period until they could harvest. If the ground dried up, they would lose the $900 up-front investment they would have to make. If they were successful and harvested a crop, however, they would be able to get their family through the dry season with minimal support from aid programs.

People and organizations are also starting to talk a lot more about the CEL (the private corporation that manages El Salvador’s dams) and their management of the September 15th Hydroelectric Dam upriver. There is still insufficient information to determine whether they could have done more to protect communities in the Lower Lempa during the last storms, but groups are talking about the need for an audit of their performance.

An article in the La Prensa Grafica this week pointed to the tension between the CEL and the communities in the Lower Lempa. The CEL maximizes energy production and profits by maintaining high levels of water in the dam’s reservoir. The more water they have in the reservoir at the end of the rainy season, the more energy they can produce in the dry season. In the rainy season, the CEL can satisfy 59% of the nation’s energy needs, but that drops down to 20% in the dry season. The end of the rainy season is when there is the greatest threat of a large storm.

The CEL could make sure that the reservoir is empty going into the end of the rainy season when the threat of flooding is the greatest, minimizing the risk of flooding downriver. But this would mean that they run the risk of having no water in the reservoir dramatically decreasing energy production during the dry season when there are no rains. A full reservoir, on the other hand, means they can continue generating electricity and power into the dry season. It also means that if there is a large storm such as Tropical Storm 12-E, they have no choice but to release waters at a high rate, resulting in flooding.

As we have discussed in previous articles, many are blaming Tropical 12-E and the massive amounts of rain on climate change. This week the Archbishop of El Salvador echoed comments made by the Minister of the Environment and others, stating, “climate change is the most serious problem confronting humanity.” The Minister of the Environment said in the days after the flood that El Salvador needs to be a model for countries around the world in mitigating the impact of climate change – his statements seem to accept that climate change at this point is irreversible, and that they must figure out how to live with it.

Preparing for climate change, however, could be where the CEL and communities downstream from the September 15th Dam may find some common ground. The government has to repair or rebuild the levees in the Lower Lempa. The higher and stronger the levees, the more water the CEL can keep in their levees and the more energy they can produce without risking the communities downstream. Post Hurricane Mitch, the levees could withstand dam releases at no more than 2500 cubic meters per second. If the dams were built to withstand much more than that, the communities and CEL come out ahead.

Just this afternoon communities in the Lower Lempa are meeting to discuss their approach towards working with the CEL. As the communities, CEL representatives, and government officials move forward in planning for how to best deal with climate change, it is important to realize that if all of the parties work together, there is likely an outcome that benefits all stakeholders. We hope that those participating in the conversations can set aside their own short-term economic and political interests in service of collective long-term benefits. 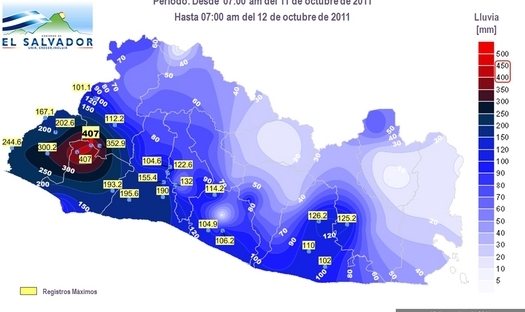 This week El Salvador has been feeling the growing effects of two low-pressure systems.  By this afternoon Tropical Depression 12 E, which sits off the coast of Guatemala on the Pacific Ocean, is expected to be upgraded to a Tropical Storm.  So far, the heaviest rainfall has been registered in the Western provinces of the country, as well as the coastal region.

Dr. Jeff Masters, from Weather Underground, describes further possibilities for tropical depressions next week.  In his blog he says:

“Many of the computer models continue to predict that a strong tropical disturbance capable of becoming a tropical depression could form in the Western Caribbean or extreme southern Gulf of Mexico early next week. Some of the spin and moisture for this storm could potentially come from Tropical Depression 12-E, which formed in the Eastern Pacific this morning, just offshore of the Mexico/Guatemala border. TD 12-E is expected to move inland over Southeast Mexico and Guatemala over the next few days, bringing very heavy rains of 5 – 10 inches capable of causing life-threatening flash flooding and mudslides.”

Civil Protection in El Salvador has declared the Orange level alert for the coast and volcanic corridor.  There have been reported mudslides and flashfloods as well, with one reported death in a mudslide in Ayutuxtepeque, near Mejícanos.  A Mayor of one of the most affected municipalities in Ahuachpan was rescued after being swept away in his pick up truck while trying to alert locals of evacuation efforts.  About 240 people are in shelters in La Paz, and another 24 families in San Vicente.

In the Lower Lempa, Jiquilisco many communities are experiencing minor flooding due to the accumulated rainfall.  These include Amando López, El Marillo I and II, Monte Mar, Octavio Ortiz, Los Lotes, Babylonia, Nueva Esperanza, Ciudad Romero, among others.  Currently, the CEL reports discharges of 1,200 cubic meters per second, and according the Community Association ACUDESBAL, the Lempa river basin can absorb up to 2,500 cubic meters per second.  This is less than prior years due to the deterioration of the already patchy levee and drainage systems.  No one has evacuated yet, but the Early Warning System is fully activated. 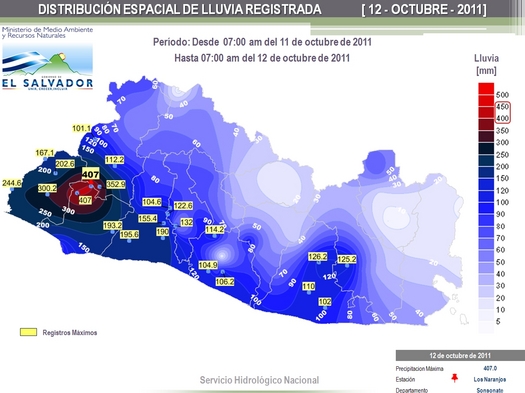 Vocies on the Border is a non-profit organizations dedicated to promoting just and sustainable development in El Salvador. Please support our work today by clicking on the Donate Now button!