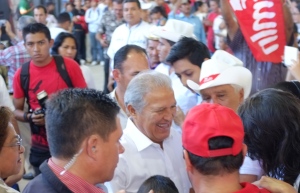 President Sanchez Cerén’s political victory has not been the glorious triumph many wanted for the former guerrilla leader. The runoff election against the ARENA’s Norman Quijano was surprisingly close, as Sanchez Cerén squeaked out a victory with only 50.2% of the vote. Quijano’s late surge seemed to stem from Salvadorans’ discontent with the lack of security and the failing truce between the country’s two rival gangs, Mara Salvatrucha and Barrio 18.

The FMLN and the country’s mood have only soured since the election. In May, the police reported 396 homicides, 170 more than the same month last year, and fingers are being pointing in all directions. Now former President Mauricio Funes recently said recently that political interests “want to give the impression that there is a failed state incapable of facing crime,” meaning that foes of the FMLN want to make the leftist government seem unable to address crime.

Indeed, the State appears helpless in stopping the violence. The gangs have taken steps over the past few years by signing a truce but the government was unable or unwilling to support their efforts. And past administrations and political leaders continually fail to address economic and social equalities, or provide youth with good alternatives. Until they do so, gangs will continue to fill in the gaps left by the stagnant economy and broken families.

President Sanchez Cerén said yesterday during his first speech as President that he would lead a System of Citizen Security. He also said, “improving the security of citizens will require that we work together against organized crime, traffickers, extortion, and all expressions of violence. We will fight delinquency in all its forms, with all legal instruments and tools of the State.”

President’s and politicians have made so many speeches over the years but taken little action. If President Sanchez Cerén is going to promote security and end the country’s violence he will have be willing to take bold and creative measures that set aside politics. Language like fighting delinquency in all its forms and using all legal instruments seems to indicate more of the same Mano-Duro or heavy hand kind of law enforcement, which has never been successful.

Unfortunately, President Sanchez Cerén also seems to be embracing the same neoliberal economic policies that the U.S. government has been promoting since the end of the civil war – creating an export economy and attracting foreign investment. These policies have failed to address the social and economic inequalities that have allowed the gangs to flourish, and in fact made divisions even wider.

Most Salvadorans seem to have pretty low expectations for their new President and his administration, and he has given them little reason to have hope for something new. Salvadoran communities and Diaspora seem willing to support the new administration, but President Sanchez Cerén and his team will have to show a level of creativity and boldness that we haven’t seen yet.